Slayer is coming to Dawson Creek

With Lamb of God and Behemoth

Spreading the Apocalypse this Summer!

LOS ANGELES, CA - There are many perilous ways one can spend time off - Volcano-boarding down Cerro Negro, Nicaragua's active volcano, or maybe bungee jumping from a helicopter over the bubbling crater of Chile’s Villarrica volcano.  How about a visit to Sao Paulo’s Snake Island, home of some 4000 golden lancehead vipers whose venom can melt human flesh, or shark diving without a cage in South Africa.  But nothing is quite as hazardous or risky as a night in the pit at a Slayer concert.  Add to that the ferociousness of Lamb of God and Behemoth, and you’ve got a Satan-approved triple bill of Biblical proportions.

The six-week expedition will rage across North America beginning July 12 in Bemidji, MN, winding up in Phoenix, AZ on August 20.  Slayer and Lamb of God will also play Wisconsin's Rock Fest 2017 (7/13) and Rock USA 2017 (7/15), and then meet up with Behemoth at the Chicago Open Air Festival on July 16.  They will stop in Dawson Creek, BC on Monday, August 14 at the Encana Events Centre. Tickets go on sale this Friday, March 3; log on to www.slayer.net/tour for all purchasing details.

Tickets will be available for purchase on Friday, March 3 at 10 a.m. MST.  Tickets are priced at $89.00 and $79.00 plus applicable fees.  Tickets may be purchased online at www.tigerboxofficeplus.ca by phone at 1-877-339-8499, and in person at the Tiger Box Office Plus locations at the Encana Events Centre.

"As metal tours go, this is the one that your fellow metal heads will be bragging about if you miss it! Not very often I get to go on tour where we are all friends to start. That being said, the potential for greatness at these events is mind blowing. I look forward to being a part of it, and hanging with old friends- bands as well as fanatical fans! Let the festivities begin!!"

"It's been a while since we've toured with the almighty Slayer, & even longer since we've hit the road with our friends in Behemoth- I can't wait! This tour is gonna be the feel-good event of the summer- the gigs are gonna be like the Haight-Ashbury during the Summer of Love in '67! Ok, so that's complete bullshit, it's gonna be absolutely nothing like that, so don't show up with flowers in your hair looking for free hugs or anything stupid like that. It will definitely be a good fucking time though (as long as your definition of a good time means brutal, caustic, and hideously loud music)- see ya there!"

"It is with the utmost pride we are announcing the Slayer, Lamb Of God and Behemoth Summer tour! We are beyond excited to be joining this bill with these living legends and... our friends one more time! We are also stoked about coming back to North American shores for the last time before kicking off the next album cycle. Come and join this EXTREME metal feast with us!”

Confirmed dates are as follows.

11   The Cuthbert Amphitheater, Eugene, OR

For more than three decades, Slayer's onslaught has proven the band to be the supreme thrash-metal band on the planet, the band that other heavy acts are measured against and aspire to. Their membership in "The Big Four" - Metallica, Slayer, Megadeth and Anthrax - the four bands that defined the thrash/metal genre - secures their place in music history.  The two-time Grammy-winners have also accumulated an abundance of certified Gold Albums along with "Best..." awards from media outlets all over the world, including Kerrang!, SPIN, Metal Hammer, Revolver, and Esquire.  Throughout Slayer's history, the band has never faltered in unleashing its extreme and focused sonic assault, and, unlike many of its contemporaries who commercialized their sound, Slayer has remained crushing and brutal, steadfastly refusing to cater to the mainstream.  Slayer's founding member, guitarist Jeff Hanneman passed in 2013, and Exodus guitarist Gary Holt has been filling in for him since.  Paul Bostaph, who was Slayer's drummer from '94 - '01, has rejoined bassist/vocalist Tom Araya and guitarist Kerry King, and is back behind the kit.

In September 2015, Slayer released Repentless, the band's 12th studio album, the first without Hanneman and first with producer Terry Date, to widespread rave reviews and the highest chart debut of the band's career.  The band also teamed up with director BJ McDonnell for three high-concept and brutal music videos for the album’s title track, then for "You Against You," and the most recent, “Pride in Prejudice."  Dark Horse Comics is publishing a three-issue comic book series based on McDonnell's original story concept for the videos and written by “Metalocalypse” director Jon Schnepp. Issue #1 was released January 25, 2017, with #2 and #3 coming in late February and late March, respectively.

ABOUT LAMB OF GOD - www.lamb-of-god.com

Richmond, VA natives LAMB OF GOD are one of heavy music’s most successful and uncompromising bands.  When the band’s first major release, New American Gospel, was released in 2000 it was immediately touted as a classic within the genre. AllMusic stated it best, “The essential signatures of post-Pantera metal are in abundance on Lamb of God's inaugural album. New American Gospel provides a mighty oak upon which gritty American metal's faith is maintained, effectively bridging the '90s' insistence upon drill-sergeant technicality and the old school's determined focus on riff construction.”

Some predicted a sophmore slump - that no band could top a debut album so strong.  They were proven wrong, with the release of 2004’s Ashes of the Wake, an album that not only exploded stateside (certified Gold by RIAA) but also saw the spread of LAMB OF GOD to all corners of the world.  The band’s first DVD, Killadelphia, followed shortly after and was certified Platinum.  Then, with Sacrament (Album, 2006, #8 debut on the US Billboard Hot 200), LAMB OF GOD were honored with a Grammy nomination for the track “Redneck”, which would be the first of five Grammy nominations for the band to date. Next came Walk With Me In Hell (DVD, 2008) and then the band’s fourth album Wrath in 2009, which debuted at #2 on the Billboard Hot 200 Chart, and then Resolution, which debuted at #3. Shortly after the release of Resolution, vocalist Randy Blythe was arrested in Prague, and spent 30 days in jail on a charge for which he was later acquitted (and lead to Blythe’s bestselling memoir, Dark Days, as well as the film As The Palaces Burn).  After regrouping, Lamb of God’s lost no ground with their latest full-length album, VII: Sturm Und Drang, the album was #3 in the US, #1 in Canada, #2 in Australia, #3 in Finland, #7 in UK, #12 in Germany and #13 in Japan, and #13 in Netherlands. “Overlord”, the first single from VII: Sturm Und Drang, achieved a new milestone for the band when it reached the Top Thirty of US Active Rock Radio Chart (Mediabase).  Most recently, late last year LAMB OF GOD paid tribute to late, longtime fan and friend Wayne Ford with the release of The Duke EP, which raised funds and awareness for the Leukemia and Lymphoma Society. The EP release coincided with a charity campaign offering personal items such as Blythe’s Ashes Of The Wake Gold plaque, signed signature model guitars, handwritten lyrics and more.

Since inception and through it all, LAMB OF GOD’s consistent and unwavering commitment to their music - and their fans – has kept them a critical and fan favorite worldwide, selling millions of albums and tickets around the world.

Behemoth have been carving out their claim as one of the world's top extreme / black metal bands since their inception in 1991. That claim was solidified in 2014 with the release of the band's tenth album, "The Satanist." The record marked their triumphant return following front man Adam "Nergal" Darski's battle with Leukemia. "The Satanist is magic. It's dangerous. It's adventurous, and it's organic," states Nergal. While instantly recognizable as the work of the Polish blackened death quartet, it takes their sound in previously unimagined and riveting directions. A writhing, densely layered, brutally violent and sinister record, it is quite unlike anything ever unleashed within the canon of heavy music. As such it demands attention, offering ever greater sonic and emotional depths with every listen. This is evident in the band's videos for the title track, as well as "Messe Noir" and "Ben Sahar." Nergal continues, "You may hear the title and think it's very primitive and one-dimensional, and yes it is, but when you look beyond that it's as primitive as it is complex and multidimensional, and that applies to everything about the record." Behemoth's lineup is rounded out by Inferno (drums), Orion (bass), and Seth (guitar).

"The Satanist" debuted at #34 on the Billboard Top 200 chart in the United States. In their home country of Poland, the album became their second consecutive #1 debut, along with 2009's "Evangelion." Since the release of "The Satanist," Behemoth have published their official biography "Behemoth: Devil's Consquistadors" as well as Nergal's own biography, "Confessions of a Heretic: The Sacred and the Profane: Behemoth and Beyond." The books are available worldwide now.

About Comcast Spectacor
Comcast Spectacor is part of Comcast Corporation, a global media and technology company that operates Comcast Cable and NBCUniversal.  Headquartered in Philadelphia, Pa., Comcast Spectacor’s three core businesses are the National Hockey League’s Philadelphia Flyers, the Wells Fargo Center venue, and Spectra, the expert in hosting and entertainment through its Venue Management, Food Services & Hospitality, and Ticketing & Fan Engagement divisions. Visit us at ComcastSpectacor.com for more information. 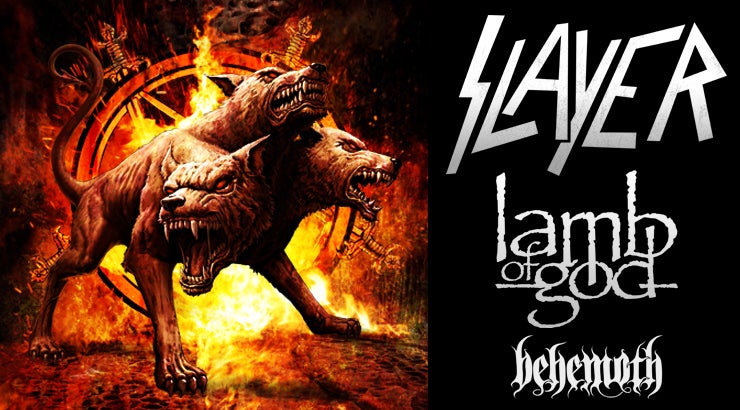