AT THE LYRIC THEATRE

ON BROADWAY AND AN UPCOMING 17 STOP U.S. TOUR

DAWSON CREEK – Fresh from their acclaimed debut on Broadway and sold out shows in the West End of London, Europe and Australia, Michael Flatley is proud to announce that he is sending his next generation Lord of the Dance: Dangerous Games to perform for Canadian audiences.  Following a remarkable 20-year run as the creator and star of the Lord of the Dance franchise, Mr. Flatley hands over the reins to his protégés James Keegan, Morgan Comer and Fergal Keaney, who have been trained by Mr. Flatley himself. The production, subtitled Dangerous Games, will kick off its Canadian tour on March 23rd, 2016 at the Abbotsford Centre in Abbotsford, British Columbia and will make a stop on Saturday, March 26 at the Encana Events Centre in Dawson Creek, British Columbia.

“I’m proud to bring my new show Lord of the Dance: Dangerous Games to Canada” says Flatley “Although I am retiring on March 17th, the show will continue to thrill audiences around the globe.”

Trailblazing Irish dancer Michael Flatley is the creator of the internationally recognizable brand Lord of the Dance which singlehandedly brought Irish Dance to a global audience with productions in countless countries around the world for over two decades.  Of The Lord of the Dance: Dangerous Games on Broadway, The New York Times said: “Undeniably exciting… Mr. Flatley’s charisma is incomparable.

Lord of the Dance: Dangerous Games features a troupe of Irish Dance’s most accomplished performers starring World Champion dancers Morgan Comer, James Keegan and Fergal Keaney in the title role of the "Lord of the Dance."  The show also features exciting and ground-breaking new technology, including holographs, special effects lighting, dancing robots, world champion acrobats and, of course, the greatest team of Irish Dancers in the world.  The score is composed by Gerard Fahy.

Full schedule of Lord of the Dance: Dangerous Games’ Tour is as follows:

Michael Flatley Michael Flatley first stepped onto the world stage 20 years ago in a performance he created that caught the attention of millions around the world. Since then, his name and Lord of the Dance brand have become synonymous with spectacular artistry and grand scale productions that have mesmerized audiences around the globe.

Michael broke the mould of traditional Irish Dancing by incorporating upper body movement and creating edgy rhythm patterns that departed from the traditional. He has created, directed and produced several successful shows including Lord of the Dance, Feet of Flames, Celtic Tiger and his latest show Lord of the Dance: Dangerous Games.

Michael is immensely proud of his show Lord of the Dance and his talented troupe of dancers and was honoured to debut Lord of the Dance: Dangerous Games at the historic London Palladium in 2014. Following a sell-out run he was subsequently inducted into the Palladium Hall of Fame alongside Elvis Presley, The Beatles and Fred Astaire.

Due to the unprecedented success of Lord of the Dance: Dangerous Games on the West End, Michael and his troupe returned to the West End stage at the Dominion Theatre in March 2015. He also joined the touring troupe for sold out performances in Dublin’s 3Arena and Belfast’s Odyssey Arena. He closed the UK tour on July 4th 2015 with a sold out performance in Wembley Arena. Having previously performed on many occasions in New York’s Radio City Music Hall, Carnegie Hall and Madison Square Garden, Michael realised a lifelong dream and debuted his new show at the Lyric Theatre on Broadway in November 2015 for a limited 8 week engagement.

His Lord of the Dance show has broken box office records all over the world. In 1998 Lord of the Dance set a record breaking run of 21 consecutive shows at London’s legendary Wembley Arena. It is a record that still stands to this day. Worldwide video sales were in excess of 12 million copies.

Feet of Flames was the first show ever to be performed at London’s historic “Route of Kings” in Hyde Park. This show reached new heights as Michael took it to stadia filled to capacity at 120,000.

Celtic Tiger debuted in 2005 and began a new era of dance which combined tradition with an international flare. Michael Flatley is also a master flautist and his album On a Different Note mixes the traditional with the contemporary.

In 1998, at the age of 39, Michael exceeded his first Guinness World Record of 28 taps per second set in 1989 with a phenomenal 35 taps per second. He has been recognized by many establishments and received countless awards for his contribution to the entertainment industry and the promotion and enrichment of Ireland, Irish Dance and Music. His support of many causes over the last two decades has aided and encouraged countless people to embrace his motto “nothing is impossible…follow your dreams”.

In 2010 he reprised his role as Lord of the Dance which was captured for the first time in ground breaking 3D. The show was shot over 3 days at the O2 arenas in Dublin, London, and Berlin.

Michael has entered into the world of art with his innovative new art form where he portrays the fluid movement of dance on canvas.  The result of the dance is a truly unique visual display. 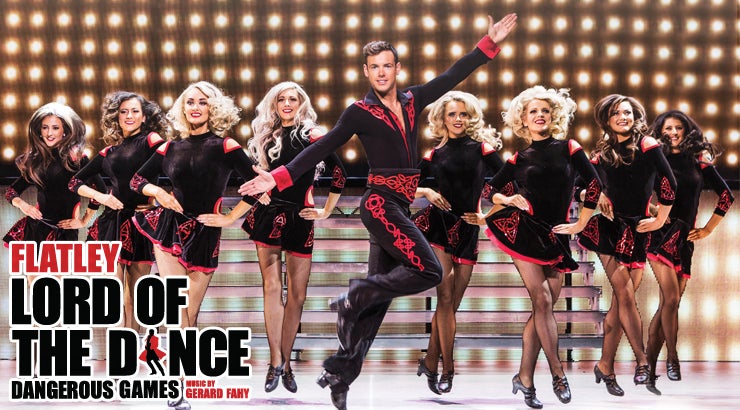 Flatley Lord of the Dance