Following a successful event in 2015 that included a sell-out crowd that watched Team Canada White win gold, eight teams from around the world will return to British Columbia for the third time in the tournament’s history to compete for the prestigious World Under-17 Hockey Challenge title.

“It is incredible that we (Fort St. John and Dawson Creek) have this world-class hockey event back in the Peace Region. What we experienced in 2015 was spectacular, it was a watershed moment for our region – the fans, the economic impact and the legacy all far exceeded anyone’s expectations and now to have this opportunity again, is truly amazing,” said Dale Bumstead, mayor of Dawson Creek.  “We are very fortunate to have the capacity to host such events, it is built upon the fans, the sponsors and the volunteers and I am truly excited to host the world again.”

In 2015, Dawson Creek and Fort St. John shared a legacy of nearly $120,000 from the proceeds of the event and an additional $50,000 was donated to local minor hockey associations from 50/50 sales. Following the event, an economic impact study concluded that close to $6 million in economic activity was generated for the Peace Region and province of British Columbia.

“We are honoured to co-host the 2017 World Under-17 Hockey Challenge in partnership with the City of Dawson Creek once again. In 2015 our two communities co-hosted this world-class event and we pulled together, pitched in, and worked hard. The comradery and team spirit that was shown in our communities was second to none,” said Lori Ackerman, mayor of Fort. St. John. “An event of this caliber is built on volunteers, sponsors and fans. They make it all possible and Fort St. John and Dawson Creek are fortunate to have the dedicated citizens to support an event of this nature.”

The eight-team tournament, which is conducted in partnership with the Canadian Hockey League and BC Hockey, will include three Canadian teams – Team Canada Black, Team Canada Red and Team Canada White - and sees the top up-and-coming talent from around the world compete over the course of seven days. Canadian players born in 2001 or later have the chance to crack one of three rosters.

“The World Under-17 Challenge is often the first bit of international exposure this talent pool receives, and it’s a great opportunity for the players to showcase their skills on a world stage,” said Tom Renney, president and CEO of Hockey Canada. “For our Canadian players, it is the first step into the Hockey Canada Program of Excellence and a chance to test themselves against an international field, while performing in high-pressure games.”

The tournament will be hosted out of the Encana Events Centre (Dawson Creek) and North Peace Arena (Fort St. John). A complete schedule and details on ticket sales and availability for the 2017 World Under-17 Hockey Challenge will be announced at a later date. 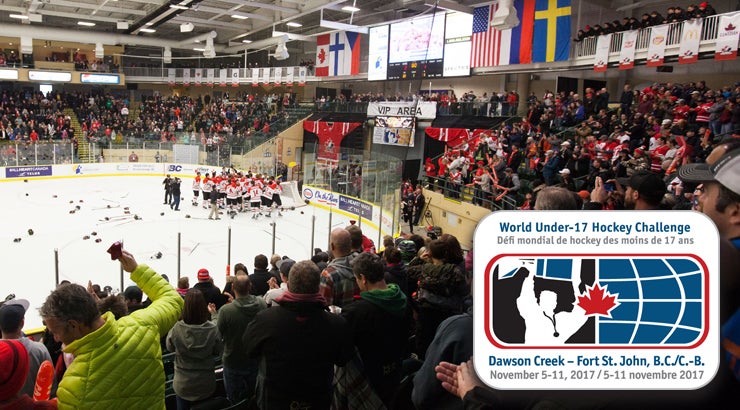