The world’s best young hockey talents will gather in northeastern British Columbia this fall. Hockey Canada, in partnership with the Canadian Hockey League and BC Hockey announced Wednesday that Dawson Creek and Fort St. John will co-host the 2015 World Under-17 Hockey Challenge from October 30 to November 7, 2015.

This marks just the second time the province has hosted the prestigious tournament; Port Alberni hosted the event in 2009. Dawson Creek and Fort St. John both have previous experience in hosting Hockey Canada events. Fort St. John hosted the 2010 Allan Cup, and Dawson Creek welcomed the National Under-18 Women’s Championship in 2012.

“This opportunity that has been presented to our two great communities is world-class. The significance and magnitude of this event is unparalleled to anything we have seen or hosted in our collective histories,” said Dale Bumstead, Mayor of Dawson Creek. “We are known as hockey cities and our hockey history is rich. As partners, we are proud to showcase our communities, our region and our northern hospitality to the future hockey stars of tomorrow.”

The sentiments are echoed in Fort St. John. “Fort St. John is pleased to be a co-host for this world-class event. This is an excellent opportunity for us to showcase our communities, provide economic benefits to our local businesses and hockey entertainment to our residents,” added Fort St. John Mayor Lori Ackerman.

With spots on three Canadian squads up for grabs, the World Under-17 Hockey Challenge represents one of the first opportunities for the nation’s top young players to wear the Maple Leaf in international competition.

“The development of our players begins with this under-17 tournament and we’re excited for fans to see the best young players in the world showcase their talents this November” said Tom Renney, president and chief executive officer of Hockey Canada. “It’s been a few years since we’ve held the event in B.C. and we know both communities are excited to support the players and experience some of the best hockey put on by these 16-year olds.”

The three Canadian teams – Black, Red and White – will be joined by the Czech Republic, Finland, Russia, Sweden and the United States, forming two groups of four teams. All eight teams will qualify for the quarter-finals, with the winners advancing to the semifinals, and losers facing off in placement games.

The 22-game tournament will be centered out of the Encana Events Centre (Dawson Creek) and the North Peace Arena (Fort St. John). A complete schedule and details on ticket sales and availability for the 2015 World Under-17 Hockey Challenge will be announced at a later date.

In partnership with the CHL and Ontario Hockey Federation, Hockey Canada also announced Sault Ste. Marie as the host of the 2016 World Under-17 Hockey Challenge. The city previously partnered with Hockey Canada to host the 2013 TELUS Cup National Midget Championship, a profit of $87,500 that was reinvested into supporting community hockey programs in Sault Ste. Marie.

“Our organization has partnered with Hockey Canada to host widely successful events in the past, and I have no doubt, given our city’s top-notch sports and accommodation facilities, along with our solid volunteer core, the 2016 tournament will continue this positive tradition,” said Ian McMillan, Executive Director of Tourism Sault Ste. Marie, a division of the Sault Ste. Marie Economic Development Corporation.

“After a successful event in Sarnia-Lambton in 2014, we’re thrilled to return to Ontario in 2016, and we know Sault Ste. Marie will put on a first-class event,” said Renney.

For more information on the 2015 World Under-17 Hockey Challenge, visit www.hockeycanada.ca/wu17 or follow along via social media at www.facebook.com/worldu17 or www.twitter.com/hc_wu17 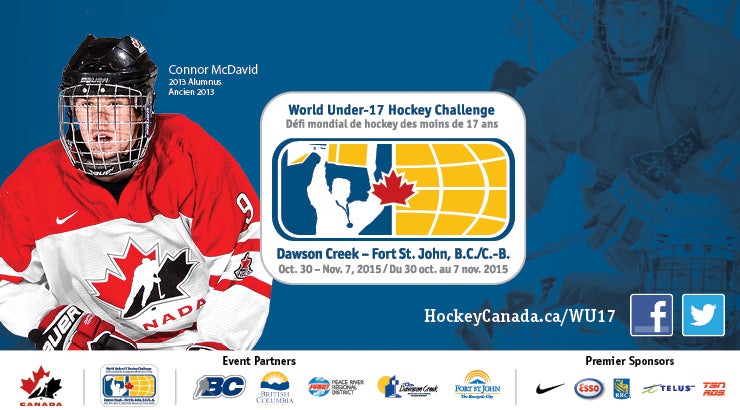