SCHEDULE AND TICKET PACKAGES ANNOUNCED FOR 2019 WORLD JUNIOR A CHALLENGE

SCHEDULE AND TICKET PACKAGES ANNOUNCED FOR 2019 WORLD JUNIOR A CHALLENGE

DAWSON CREEK, B.C. – The World Junior A Challenge – a showcase of Canadian and international talent – will once again feature a five-team format when Dawson Creek, B.C., hosts the event for the first time, Dec. 7-15, 2019.

“The City of Dawson Creek is thrilled to once again host the world at the Encana Events Centre, bringing some of the best young hockey players from around the world to our community for a week of amazing action. It is very special for us to be able to share this event with our neighbouring Peace Country communities and our First Nation neighbours, the Saulteau and West Moberly First Nations, and to work with Chetwynd, Fort St. John and Grande Prairie as pre-tournament hosts,” said Dale Bumstead, mayor of Dawson Creek. “We are so appreciative of the partnership with Hockey Canada to continue to bring these world-class hockey events to Dawson Creek and the B.C. and Alberta Peace River region.”

The official tournament schedule kicks off with a pair of rivalry match-ups on Dec. 7, with Team Canada East taking on Russia at 2 p.m. MT and Team Canada West facing off against the United States at 7 p.m. MT. Teams will wrap up the preliminary round on Dec. 13 before the tournament concludes with the bronze and gold medal games on Dec. 15. The schedule will also feature one preliminary-round game between Team Canada East and the United States to be played at North Peace Arena in Fort St. John, B.C., on Dec. 11.

“The five-team schedule was certainly a success in 2018, as it gave fans the opportunity to watch both Canadian teams take on their Russian and American rivals, as well as two great games against the Czech Republic,” said Brent Ladds, president of the CJHL. “We look forward to bringing this event to Dawson Creek and showcasing the elite talent of Junior A hockey, both in the CJHL and internationally.”

Prior to the start of play, the World Junior A Challenge will head to three surrounding communities for a slate of pre-tournament games. Team Canada East will take on the United States at the Chetwynd Rec Centre in Chetwynd, B.C., the Czech Republic will match up against the Grande Prairie Storm of the Alberta Junior Hockey League at the Revolution Place in Grande Prairie, Alta., and Team Canada West will play Russia at North Peace Arena in Fort St. John.

A limited number of early-bird ticket packages for the 2019 World Junior A Challenge will be available for purchase starting May 10 at 10 a.m. PT at HockeyCanada.ca/Tickets or at the Tiger Box Office Plus at the Encana Events Centre for $149. The early-bird pricing ticket package includes one ticket to every game in Dawson Creek, including the bronze and gold medal games, as well as a Hockey Canada toque.

“The 2019 World Junior A Challenge features unique scheduling, as both Canadian teams will have the chance to play in front of Fort St. John hockey fans in a pre-tournament or preliminary-round game,” said Dean McIntosh, vice-president of events and properties for Hockey Canada. “With two additional pre-tournament games scheduled for Chetwynd and Grande Prairie, this year’s World Junior A Challenge will allow more hockey fans in the region to experience some of the top talent in the world.” 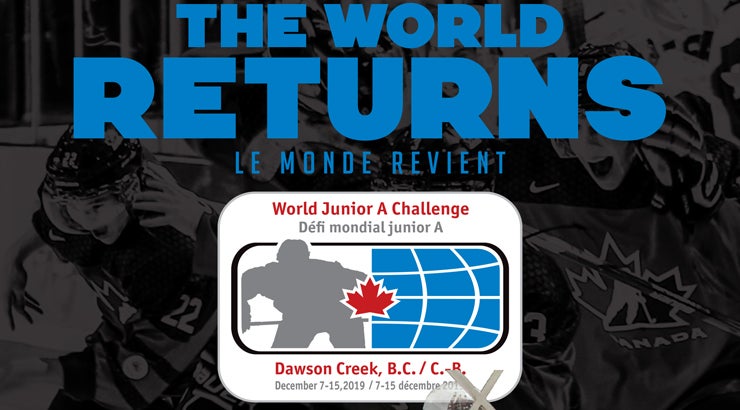