Queens of Sheba tour with Heart and Joan Jett & The Blackhearts

Paul Mercs Concerts is pleased to announce the 2016 tour of  QUEENS OF SHEBA featuring HEART and special guest, JOAN JETT & THE BLACKHEARTS with a stop at the Encana Events Centre in Dawson Creek, BC on Friday, March 11, 2016.

Rock & Roll Hall of Fame inductees Ann and Nancy Wilson first showed the world that women can rock when their band, Heart, stormed the charts in the ‘70’s with hits like “Crazy on You,” “Magic Man,” “Barracuda,” “Straight On,” and so many more.  Not only did the Wilson sisters lead the band, they wrote the songs and played the instruments too, making them the first women in rock to do so.  Heart continued topping the charts through the ‘80’s and ‘90’s with huge hits like “These Dreams,” “Alone,” “What About Love,” “If Looks Could Kill,” “Never,” and a string of other hits that showcased the sisters’ enormous talents as musicians, singers and songwriters.  Powerful and exciting on stage, Heart performs their amazing show to many hundreds of thousands of fans annually.

As individuals, the sisters have also achieved significant success.  Ann sang on songs that were both chart successes and motion picture themes, like “Almost Paradise” from Footloose, “Best Man in the World” from The Golden Child, and “Surrender to Me” from Tequila Sunrise, while Nancy composed and performed the scores to a half dozen motion pictures including the award winning “Jerry Maguire” and “Almost Famous.”

Along the way, music by Ann and Nancy Wilson and their band Heart sold more than 35 million albums, sold out arenas worldwide, and found their way into the soundtrack of American life through radio, motion pictures, television, and associations with branded sponsors.

The last decade has been filled with new accomplishments for Heart.  Nearly 35 years after their first big hit, Ann and Nancy Wilson were back in the Billboard Top 10 in 2010 with Heart’s “Red Velvet Car” album, and a Top 5 DVD (“Night at Sky Church”).  2012’s “Fanatic” continued Heart’s current chart success, spawning two hit singles (“Fanatic” and “Dear Old America”) and debuting in the Billboard Top 25.  They also released a comprehensive CD box set entitled “Strange Euphoria,” filled with rarities and previously unreleased treasures that met with acclaim from critics and fans alike.

In September 2012, Ann and Nancy released their first-ever memoire (Kicking & Dreaming: A Story of Heart, Soul and Rock & Roll).  The book spent several weeks on the New York Times “Best Sellers” chart and was released by HarperCollins on paperback on September 25, 2013.

On Dec 2, 2012 at Kennedy Center Honors tribute to the surviving members of Led Zeppelin, Heart’s soulful and touching performance of “Stairway to Heaven” received a standing ovation and the You Tube video has garnered almost 40 million hits.

In 2014, Ann and Nancy performed a TV holiday special, “Heart & Friends: Home for the Holidays”, with guests Shawn Colvin, Sammy Hagar, Pat Monahan and Richard Marx, which was released on CD and DVD for Christmas.  Following in May 2015, they released a children’s book, Dog & Butterfly, based on the famous and well-beloved hit song.

Joan Jett is an originator, an innovator, and a visionary.  As the leader of the hard-rocking Blackhearts, with whom she has become a Rock and Roll Hall of Fame inductee, she's had eight platinum and gold albums and nine Top 40 singles, including the classics "Bad Reputation," "I Love Rock 'N' Roll," "I Hate Myself For Loving You," and "Crimson and Clover." She sits at the head of her own independent label, Blackheart Records. Jett has acted in movies and television, including 1987's Light Of Day, and in a Tony-nominated Broadway musical, The Rocky Horror Show. She has appeared on such acclaimed television shows as Oprah (the last season) and Law and Order.

As a producer, she has overseen albums by Bikini Kill, Circus Lupus, as well as the Germs' LA punk masterpiece, GI.  Her music has become a permanent force in mainstream culture. A version of "I Hate Myself for Loving You" has been NBC's Sunday Night Football, performed this past season by Carrie Underwood, and her music is heard in countless films and TV shows including Easy - A, Kick Ass, The Runaways, Shrek, Baby Mama, and many more.

Since co-founding the Runaways, the pioneering all-girl punk quintet, at age 15, Jett's determination and drive have kept her in the public eye. Jett was able to see her story told in The Runaways, the film based on (lead singer of The Runaways) Cherie Currie's book Neon Angel starring Kristen Stewart as Jett, and her fellow A-lister Dakota Fanning as Currie. Jett was close to the project: She served as an executive producer.

Jett and the Blackhearts released their latest record, 'Unvarnished,' in 2013 and continue touring the globe to throngs of adoring fans.

Joan Jett has spent her lifetime breaking barriers and challenging expectations - this is, after all, a woman who is both a spokesperson for PETA and a devoted supporter of the US Military. She's fought hard for all of her historic accomplishments, yet she remains humble and appreciative.

"I've had a blessed career," she says. "I consider myself so lucky to have been able to do things my own way." 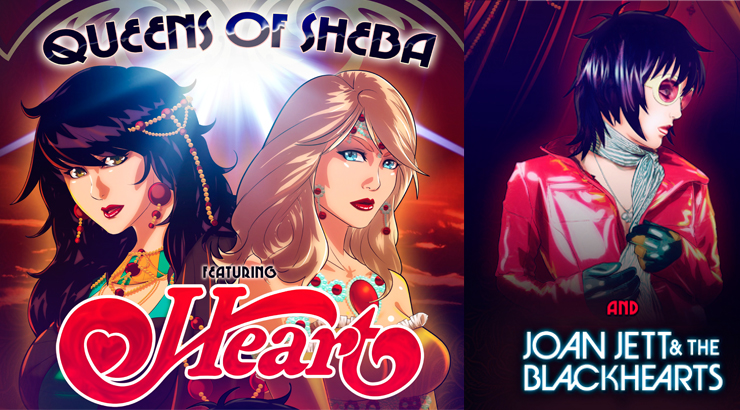 Heart and Special Guest Joan Jett and The Blackhearts