Photo Courtesy of the SOEC

Wednesday at the Encana Events Centre

Manson's North America tour just started last week with shows in Portland, Penticton and Vancouver.  So far, the music is doing the speaking and the crowds are hearing it loud and clear!!

"He was able to simply perform, falling under the spell of his band's heady mix of industrial rock, glam, and metal. " said the Oregon Live review of the show.

While the Penticton Western News (PWN) said "The lights dropped and the dry ice fog didn’t just fill the stage, it nearly filled the stadium. The bass drum hit, and from there it was two and a half hours of non-stop intensity." in their review.

Later in the review, PWN said "Sometimes in music, a certain person or band hits the right feeling for the right time in the right place. Manson clearly struck a chord with the bizarre, the weird and the non-conformists 20 years ago. So much so that his presence still brings with it an aura of darkness with fans to this day coming out of the woodwork dressed in as much black as they can muster."

If you want to check out what you can expect to see during the show, check out Concert Addicts picture spread from the Vancouver show the other night here!

Wednesday will be another great night here at the centre and we look forward to seeing you here! 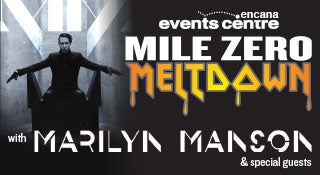