DAWSON CREEK - NEAL “VORTEX” SCHON has been added as the special guest to JOURNEY’s upcoming Canadian tour, which launches Monday, July 6 in Winnipeg Manitoba with concerts scheduled through August 3 in St. John’s, Newfoundland and Labrador. This tour marks the first time the American rock greats perform a Canada-only tour, including markets in which band has never previously performed such as Penticton; Prince George; and Dawson Creek, British Columbia; and Lethbridge, Alberta. See below for a complete list of tour dates. Tickets are on sale now - visit www.journeymusic.com for complete tour and ticketing information.

Blazing hotter than ever with the lineup of founder Neal Schon (lead guitar and backing vocals), Jonathan Cain (keyboards and backing vocals), co-founder Ross Valory (bass and backing vocals), and lead vocalist Arnel Pineda (who was discovered by Schon), Journey has created some of the best-known songs in rock, such as “Wheel In The Sky,” “Separate Ways,” and “Faithfully.”  Neal Schon recruited Omar Hakim to play drums for Journey’s recent Hollywood Bowl Opening Night concert, the band’s July 4th performance in Provo, Utah, and the Canadian tour.

The Hollywood Bowl, one of the most iconic concert venues in the world, launched its 94th season with its 2015 Opening Night Concert featuring JOURNEY who performed with the Hollywood Bowl Orchestra and Youth Orchestra Los Angeles (YOLA), on June 20. The Bowl’s opening night is traditionally a fundraiser for the Los Angeles Philharmonic’s many education and community programs, which serve more than 150,000 youth, families and teachers every year, and this year it raised a record $1.6 million; the previous best was $1.4 million in 2011.

Following the Hollywood Bowl opener, and Hakim’s debut with Journey, Neal Schon stated, “I'm very happy I was able to bring Omar Hakim in to help us pull together a very elaborate and complex show at the last minute. It was a nearly impossible feat, and tall order for anyone, but with Omar’s musical integrity and talent, we pulled it off and had a blast! Glad to know I've still got the ears and now I'm 2 for 2: first was finding Arnel and now, recruiting Omar Hakim.”

Over the years JOURNEY has earned multiple accolades, including 19 Top 40 singles; producing 25 Gold and Platinum albums; and receiving a Diamond certification for its Greatest Hits album, marking U.S. sales in excess of 15 million. In 2011, they drew nearly a million fans to their Eclipse World Tour and was awarded the prestigious "Legend Of Live Award" at the Billboard Touring Awards in honor of their significant and lasting contributions to live music and the touring business, and in acknowledgement of their commitment to the fans and the art of performing live.

The group’s seminal anthem - “Don’t Stop Believin’” - is the top-selling digital catalog track in history, after being featured in the last scene of the electrifying series finale of HBO's ‘The Sopranos’  and then reaching another level of stratospheric success when it was covered by the cast of FOX's wildly successful series ‘Glee.’  Three decades after its original release, "Don't Stop Believin'” has reached a new generation of young fans welcoming this legendary band as it continues to bring its signature sound of classic hits around the world.

The intensely creative guitar giant, Neal Schon, has always had an innate ability to make glorious music. He began playing at age five and was inspired by soul vocalists like Aretha Franklin and Gladys Knight, and blues and jazz guitarists ranging from B.B. King Albert King, and Eric Clapton to Wes Montgomery. When Schon was just 15 years old, Carlos Santana invited him to join his band. Schon’s recording debut was on the classic 1971 album Santana III. He played the solo on the LP’s hit single, “Everybody’s Everything.” Recently Schon  completed the album Santana IV with Carlos Santana, co-writing songs and playing guitar. Additionally, Journey, co-headlined with Santana on Carlos’ recent homecoming concerts in Mexico 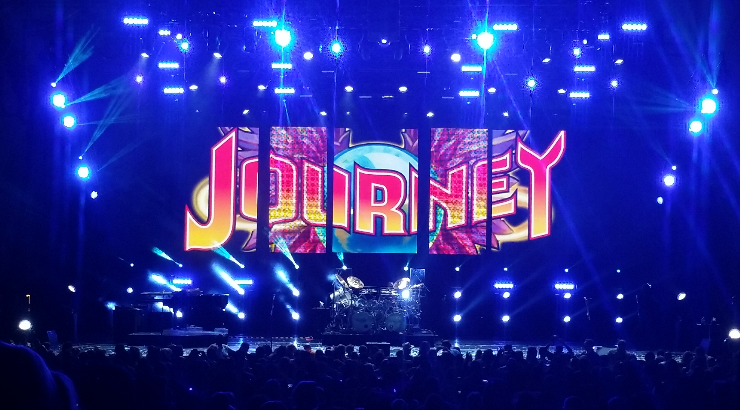