Alpha Bull - Turning an arena into a stage

Some elite athletes retire and put the sport behind them, but not Chad Besplug: three-time Canadian Champion, PBR World Finalist and $100,000 winner of the Calgary Stampede. Besplug swung his post-bull-riding mental focus to creating Alpha Bull – a company that produces an event with the lighting and production value of a rock and roll concert combined with the heart-stopping, edge of your seat action of professional bull riding!

You can see that Alpha Bull is different as soon as you glimpse the unique logo used to brand this one of a kind company. Setting aside the noise from the logo designers who were coaching him about creating something "simple," Besplug reached out to an artist friend, Walker Watt, to draw the Brahma Bull outline. "I wanted the shape of the head to match how the riders see the bull." After Watt completed the outline drawing, Besplug engaged the services of a designer, who just happened to be a friend of a friend, to complete the look.

The finished graphic is reminiscent of a Day of the Dead Sugar Skull - not something typically seen on the Canadian rodeo circuit. That one-of-a-kind graphic is what makes the t-shirts, hoodies, hats, and other wearable merchandise sold during Alpha Bull events a 'must-have' souvenir of the experience.

At 34 years of age, Chad is not going back to bull-riding. A few years ago, he took a break from the circuit to have shoulder surgery and well, to make a long story short: healing + boredom + restlessness = Alpha Bull!

Alpha Bull started small, but it didn't take long before those small events became more significant events. After receiving words of support and encouragement from his business mentor, Al Lively, Chad made the transition to larger-scale shows.

The first big venue was Mosaic Place in Moosejaw, Saskatchewan. How did he feel about taking that big step? Besplug says, "there was alot of pressure" and "it was a huge step from before, and the level that I was shooting at was much higher. There were many more folks depending on me to deliver!". 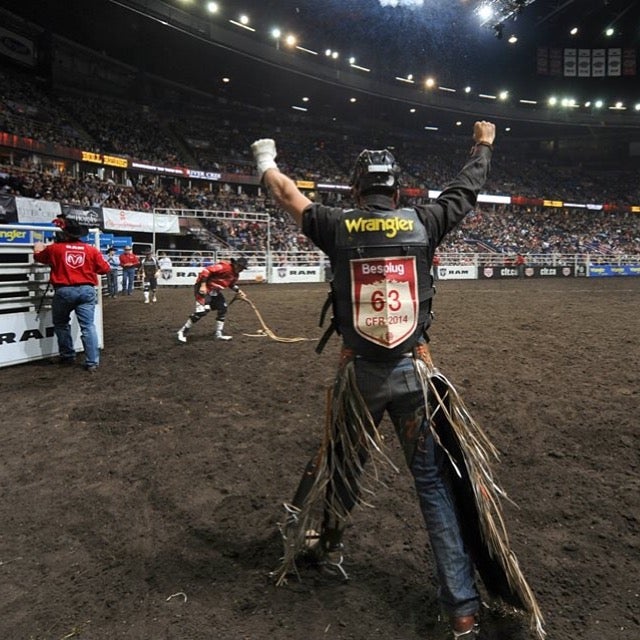 e loved it! Sharing that, "it was intense and time-consuming – every little detail that went into the event." Throughout it all, Chad was intent on being 'present,' a trait that has served him well in his varied career.

Speaking about personality traits: We asked him if his post-bull-riding personality helped him succeed in the fast-paced event production industry, and his answer was intensely thoughtful and self-aware. "The incredible rush experienced before, during and after a successful event is very similar to bull-riding!" but more importantly, that it is "the personal ethic of working hard and willing to work harder than everyone else that contributes to success."

So why combine bull riding with rock and roll?

"I didn't know what rock and roll was when I was a kid," Besplug explained. Growing up in a somewhat conservative household, the closest to rock and roll played in the home was the Beach Boys. It took a Nirvana Album to help him recognize that, while the Beach Boys were okay, hard rock was better!

Tossing convention to the wind, Besplug and his team from Alpha Bull have combined the best of both worlds: Professional Bull Riding plus Rock and Roll. The look and feel is an extension of both his and the production manager's personality. They have turned the entire arena into a stage!

"There is no denying that our (people in general) attention spans are shortening, and this event format lends itself to that philosophy," says Chad.

So we had to ask, what's next for Alpha Bull?

A brief heartbeat of a moment passed between us on the telephone before I heard, "Build the biggest bull riding event in Canada."

To get tickets for PBR Dawson Creek at the Encana Events Centre and experience this one of a kind event - go to www.tigerboxofficeplus.ca, call 1-877-339-8499 or follow the TICKETING LINK HERE

This event is produced by Alpha Bull and presented by Lyon's Production Services. 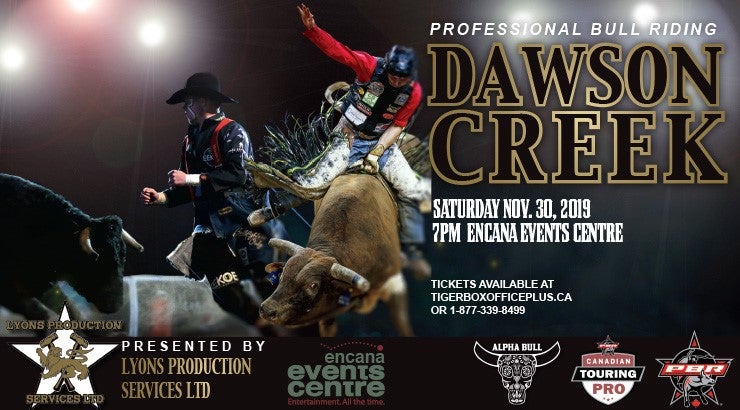